Carlos Kingsley Ahenkorah has resigned from office as Deputy Minister for Trade and Industry, the Presidency has announced.

His resignation comes barely hours after he admitted in an interview that he visited some voters registration centres in his constituency despite knowing he has tested positive for Coronavirus.

“The President of the Republic, Nana Addo Dankwa Akufo-Addo, on Friday, 3rd July, 2020 accepted the resignation from office the Deputy Minister for Trade and Industry, Hon. Carlos Kingsley Ahenkorah, MP, which takes immediate effect,” a statement signed by Eugene Arhin, Director of Communications, Office of the President read.

It continued: “This follows the admission by the Deputy Minister of his breach of the COVID-19 protocols, when, as a person certified to be positive for the virus, he visited a registration centre in his constituency before the period of self-isolation was complete.”

Mr. Ahenkorah had in an interview on Eyewitness News, July 2, mounted a spirited defence for his action. He insisted he did not err because he was cautious during his stay at the registration centres.

“Yes, I have COVID-19 but on the first day of the registration, there was a problem at one of the centres. But knowing my status that I am asymptomatic, I visited only one centre to check on the issue. I never got in the midst of people,” he said.

“I drove in my car and got there, got down and spoke far away with the EC officer who explained the issue to me. I told her I will report this to their boss and then I just left. I was very careful. It is important for people like us to know their status because whether you like it not, we will go into the midst of people.”

“I spent a night at Korle Bu to be checked on by the experts at the Isolation Center. My doctor took my samples and asked me to go into self-isolation which I have been since last week.”

Ahenkorah’s decision and subsequent defence caused outrage. A section of the public expressed discontent with some labelling him as ‘callous’. They could not fathom why a public official would violate preventive protocols and refuse to accept his wrong.

The lawmaker occupied the number one spot on Twitter trends from Thursday evening and maintained his position Friday with #CarlosMustResign.

Early Friday, reports were rife the President had given Ahenkorah who was diagnosed with the deadly disease on June 23, an ultimatum to resign or be fired.

Meanwhile, President Akufo-Addo has entreated “all of his appointees to bear in mind that they are to provide leadership, at all times, for adherence to the protocols that have been established to help the nation defeat COVID-19.” 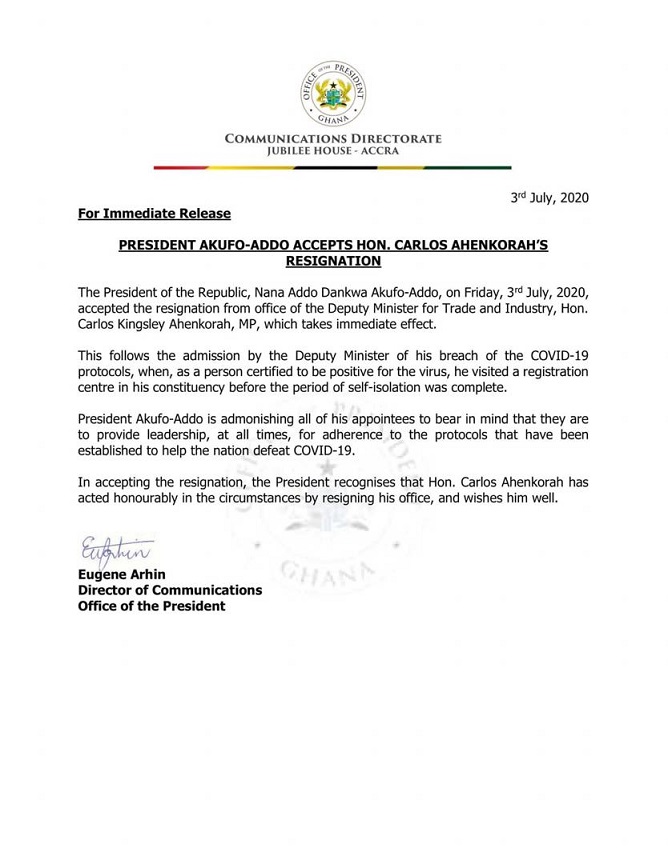