Go and ask your grandfather; did we make the law? – A Plus ‘bites’ Ursula Owusu

Popular musician and founder of The People’s Project Kwame A Plus has asked Ursula Owusu Ekuful to go and ask her grandfather why Carlos Ahenkorah should be prosecuted.

In a Facebook post, A Plus wrote: “Go and ask your grandfather. Did we make the law????”

Carlos Ahenkorah on Friday, July 3, 2020, resigned after visiting a centre in the ongoing voter registration exercise despite being aware that he was positive for Coronavirus.

Revelations of his conduct were met with intense public criticism and pressure for his removal from government.

Ursula Owusu-Ekuful, the Communications Minister during an interview with the media noted that, the deputy Trade and Industry Minister should have been applauded for resigning after he flouted COVID-19 safety protocols whilst in isolation.

“I think that in the heat of the moment, Carlos felt compelled to go out there and monitor the registration process. My heart really goes out to him. He is an excellent material in the Ministry, he will be missed but we must respect and applaud him for doing the honourable thing once he realised that he was part of a government that was preaching the compliance of all the COVID-19 protocols.

“He breached it and he has taken personally responsible for it. So, instead of condemning him, we should appreciate the steps he has taken. It is very rare in this country for people to acknowledge that whatever they have done is wrong so they will lay their position down. Others will have been defending the indefensible,” She noted.

Commenting on the numerous calls for the prosecution of Mr. Ahenkorah, Mrs. Owusu-Ekuful said they had no basis.

“Prosecution for what? Unless you can show that an individual contracted the virus by coming into contact with him, because he went out on the monitoring. It will be difficult to establish a case for spreading COVID-19 unwillingly. It is easy to say but will you have the evidence to prosecute? I think that if it is punishment we want, he has laid down his position as deputy Minister to take responsibility for it. You don’t beat a dead horse, what else would you achieve by his prosecution? If he had insisted that he hadn’t done anything wrong and so he was still going to defend his action then the call for further sanction to be applied would be in order,” Ursula said. 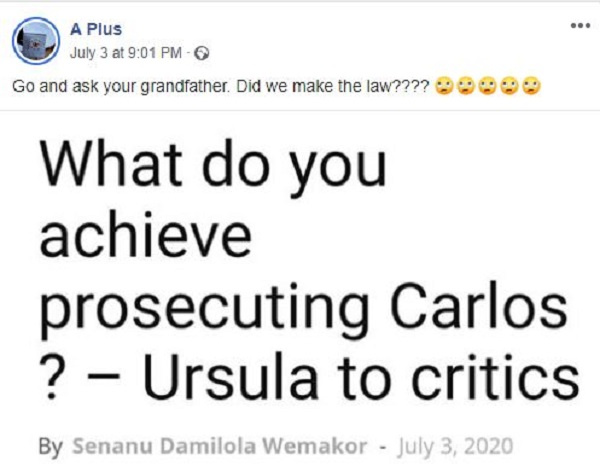