48% of Ghanaians surveyed in the Ghana Election Poll say they would vote for former President John Dramani Mahama if elections were held today, while 35% of the respondents were rooting for President Nana Addo Dankwa Akufo-Addo.

The first wave of results of the Ghana Election Poll conducted online via the renowned market research firm MSI-ACI from May 1 through to June 30, however, finds 17% of respondents saying they will vote for none of them if elections were held today.

Out of the weighted sample of 792 adults, John Dramani Mahama won the hearts of more males than females making 50.5% and 45.2% respectively, while President Akufo-Addo won the hearts of 37% of men against 33.3% of women.

In the age bracket, however, Nana Akufo-Addo won the hearts of voters between ages 25 and 39 who say they will vote for him if elections were held today. Former President Mahama rather got the attention of voters between ages 40 and 49. Meanwhile, some 33.2% of voters in their 20s showed no interest in voting for any of the two candidates if elections were held today. 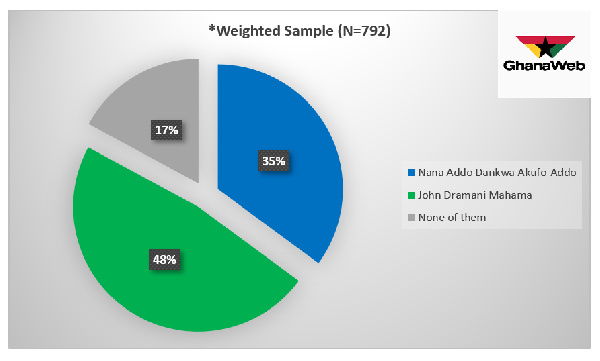 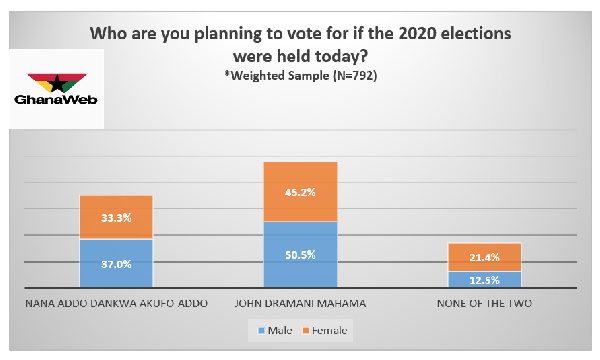 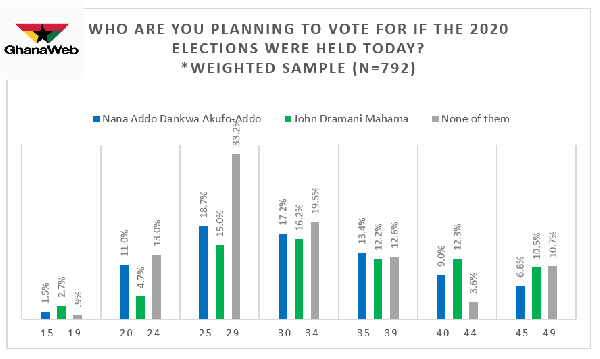 In the Greater Accra Region, John Dramani Mahama would win by a narrow margin while President Akufo-Addo would win the Ashanti Region with a wider margin. 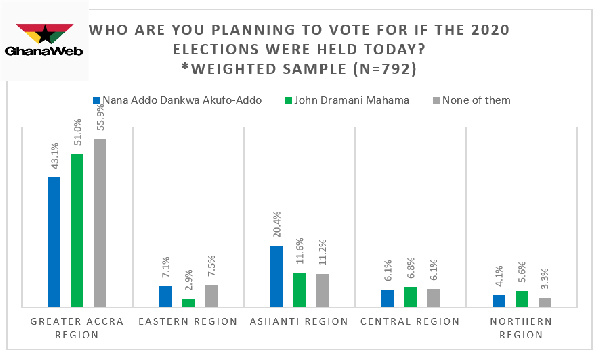 Results for the full sample have a margin of sampling error (with finite population correction) of plus or minus 3.482%. A representative sample of the Ghanaian population was achieved by weighting (matching) the data according to age and gender demographics of the 2010 population and housing census and the Ghana Living Standards Survey (GLSS 7).

The Ghana Election Poll is powered by GhanaWeb and the Africa Consumer Panel which is a cooperation between the digital publisher Africa Business Communities and renowned market research firm MSI-ACI.

The online poll is conducted every month and the results are published at the beginning of every other month on GhanaWeb.com. It is devoid of spam as the respondents can take the survey only once. The MSI-ACI platform that hosts the survey records the device on which the respondent takes the poll and does not allow for a second attempt from the same device.

The Ghana Election Poll is different from the open-access poll which is running on GhanaWeb. The latter allows participants to self-select into participation and its results cannot be generalized because it is a representative of only the participants of the poll.

Click here to take part in the second wave of the Ghana Election Poll.