According to him, Dr Kwabena Duffuor admitted in a letter to the receiver that the bank’s assets registered in the name of the shareholder group were used in registering a company belonging to the owner of uniBank.

“How can Rev. Agyinasare make a statement that out of jealousy, NPP collapsed indigenous banks when the man himself has admitted wrongdoing. If you don’t have the facts, I’ll give you all these facts for you to read,” Ken Agyapong said on Net 2 TV.

Mr. Agyapong believes all these contributed to the collapse of uniBank and all the other indigenous banks in the country, and not because of jealousy as the Perez Chapel International head pastor sought to preach.

He indicated that Dr. Duffuor in his admission letter on the subject ‘Demand Notice for Payment of Amount Due from Related Parties of uniBank (Ghana) Limited’ stated, “We refer to your letter dated 31st May 2018 on the above subject and wish to reiterate our firm commitment to address the liquidity and solvency gaps created by the gross amount of GHC4.97 billion as quoted and analysed in your letter referred above.”

“We wish to indicate that while some of the figures and conclusions stated and analysed in the document attached to your letter may still be preliminary, we are willing to work with these as ballpark figures and are dedicated to speak to the substantive, more urgent issues that would potentially bring the bank on a strategic path to recovery. We shall be grateful to have a separate discussion on the detailed figures received at a later date to be agreed by both parties. We will contact you for a convenient date in this regard,” Dr Duffuor’s letter allegedly read further. 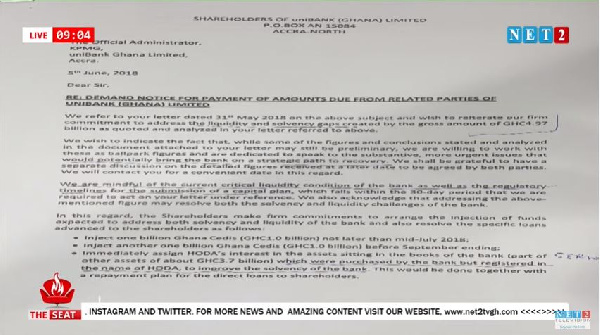 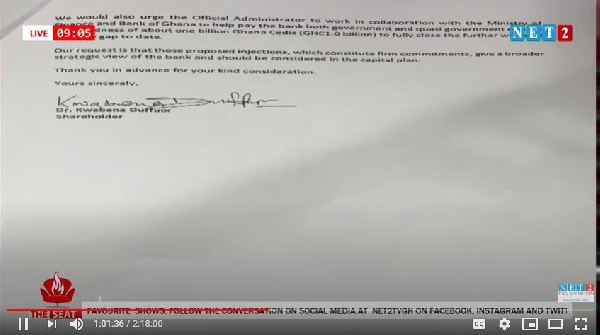 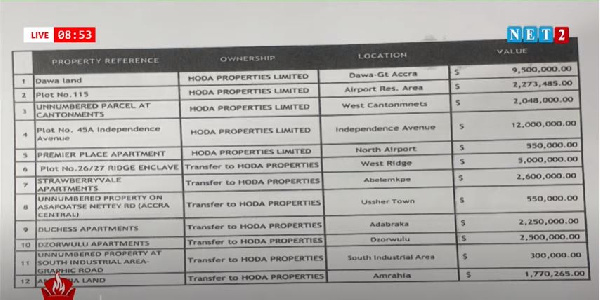 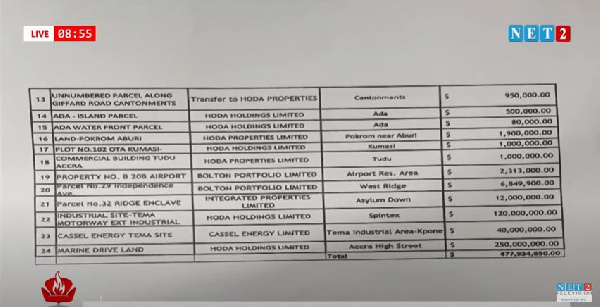 Bishop Charles Agyinasare, the Presiding Bishop of Perez Chapel International, on Sunday, July 19, 2020, questioned why locally-owned uniBank, GN Bank and UT Bank could not have been salvaged by the Bank of Ghana during its financial sector cleanup exercise.

In his virtual sermon themed: ‘Getting rid of envy’, Bishop Agyinasare said that the same “demons” that possessed politicians in the days of old to collapse local businesses were still lingering and wreaking havoc.

He said they are “still at work today and we must exorcise this nation from that demon otherwise we are far from going forward”.

“I have been asking myself: So, for Dr Kwabena Duffuor, under whose time as Minister of Finance, we had the best economic growth rate of 14 per cent, there was nothing we could do with his bank?”

“What about Dr Papa Kwesi Nduom, who introduced or expanded susu banking and had branches than any commercial bank with more customers?” the Perez Chapel International founder asked.

“Then, my own Amoabeng, who helped me grow my money to my first $100,000, which I withdrew and gave out for the building of the Dome, as part of my contribution. Could nothing have been done to salvage some of these great institutions?”

This, Kennedy Agyapong said, is a “fallacy of argumentum ad hominem”.

Meanwhile, Dr. Duffuor is challenging the government through court and arbitration processes for the return of his bank.