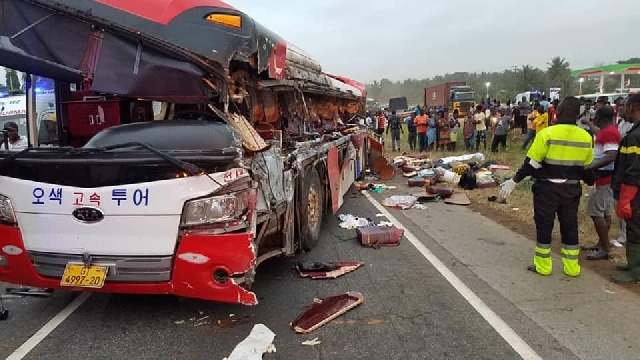 One of the mangled buses

At least 11 persons have been reported dead in a dawn accident which occurred at Kyekyewere in the Eastern Region on the Accra-Kumasi Highway.

The accident occurred around 4 am on Tuesday, 15 September 2020.

According to the Director of the Ayensuano National Disaster Management Organisation, Mr Joseph Okai Gyan, “a DAF cargo truck fully loaded with goods going to Accra, veered off its lane and crashed into two buses fully loaded with passengers, heading to Accra from Kumasi.”

He indicated that “those who are dead are about eleven, while there are a lot of injured persons.”

Personnel from the Ghana Police Service, Ambulance, and NADMO got to the scene to take the casualties to the Nsawam and Suhum Government Hospitals.

The dead bodies and body parts have been conveyed to the morgue.