The Managing Editor of the Daily Dispatch Newspaper, Benjamin Ephson, has said that a decision by the National Democratic Congress (NDC) to sack 18 of its members who have filed to contest the coming elections as independent parliamentary candidates, would cost the party at least four seats in Parliament.

He told host of the show, Kwamina Sam Biney that “In Upper West, the New Patriotic Party is going to win the Nadowli- Kaleo Parliamentary seat and in Damango, the seat won’t go in favour of the NDC.”

A statement signed by the opposition party’s General Secretary, Johnson Asiedu Nketiah on Tuesday, November 3, said the affected persons who “sought for and obtained nomination from the Electoral Commission …have forfeited their membership of the party”.

NDC members who endorsed the candidature of these independent candidates, the party said, would be sacked as well.

The candidates have since been directed to return any property in the possession that belongs to the party.

Find below the affected members 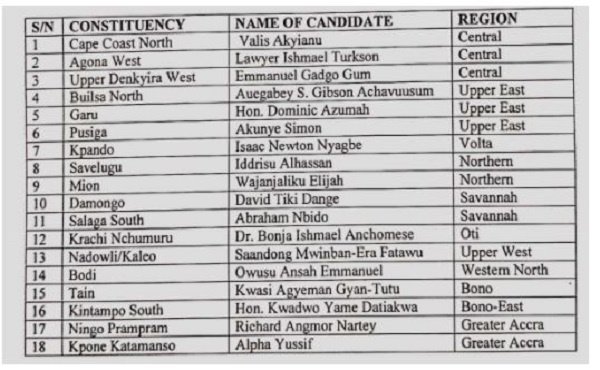